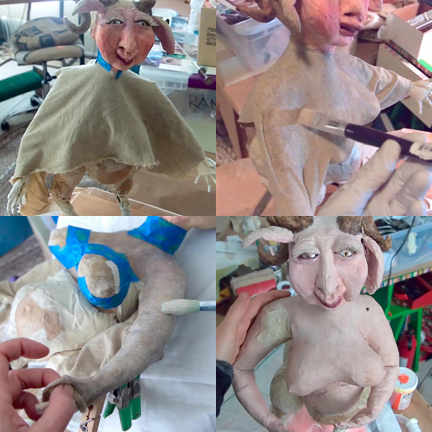 Once the great armature by Dick Kaneshiro was embedded inside the foam-filled papier mache cast skin, I thought to skin the upper half of the Rana puppet's body with 4-way stretch jersey fabric applied with a generous amount of the Fray Stop elastic glue. (I've been wrongly calling it Fray Check, it's Stop Fraying by Aleene's that's got the right mojo.)

It was, as usual around here, a lengthy slow awkward process of attaching the fabric skin and wrapping/anchoring it close to the cast until it dried well. At that point repairs to the puppet were made, including a very lame "pooh bear" fix on her right shoulder joint. I couldn't get that one pivot joint to stay together there so I jammed in about 6 lengths of twisted Almaloy to give her some motion holding. The rest I'll fake. When patched back together, I painted the fabric in hopes that would be the final surface. It wasn't, another layer of sheer washi lamenated with more Fray Stop on top of the fabric was.

Even so, the fabric layer seems to allow the paper layer to flex without tearing during use. Kind of like collagen I guess. So, back to the painstaking labor intensive operation of using washi to smooth over the fabric flaws. 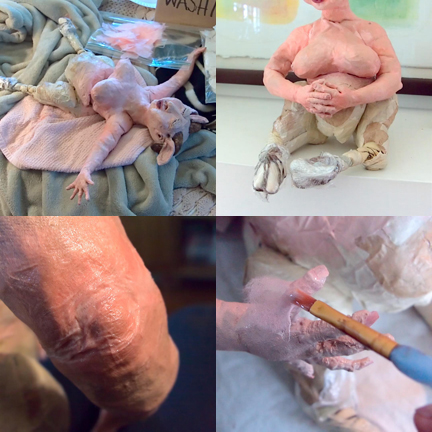 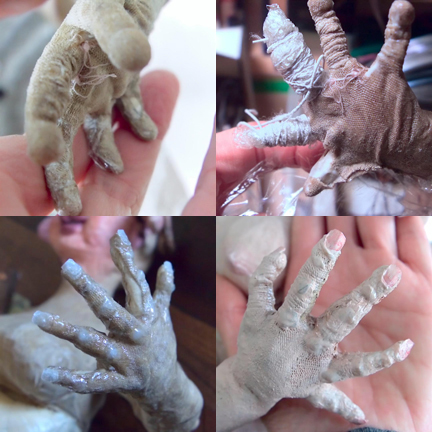 You can see the examples of what took place step by step via these shots of the hands in progress. upper left shows how I used plastic wrap to secure the fabric to the cast tightly around each finger. Upper right shows how at first, I used elastic cord alone but it left impression texture behind. I wised up a bit and used thick heaps of plastic around the needed area first before tying down.

lower left shows the finished fabric layer, as good as I could get it, being embellished with Stop Fraying and Quick Grab glue to build up knuckle and cuticle shapes. Vellum paper nails were added. Lower right shows how rough the two materials looked after a coating of acrylic paint. 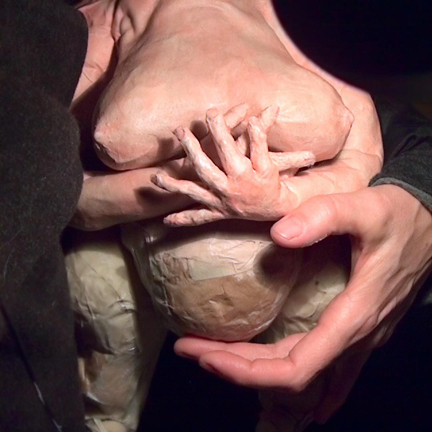 Ah, much nicer with an additional layer of washi and Stop Fraying. The finished skin feels incredibly skin like. It droops and sags as the puppet changes positions, especially at the neck. But that works for this puppet because she's rather older and shouldn't be youthfully smooth.

Ready for paint, for color details only, and next post... the furry bottom....