One of our cats pees over everything. Every. Thing. I spend a lot of time each day scrubbing and cleaning up after her. I had two 10" tall prints of Rana's portraits on my desk to use as reference for retouching the file to order a poster-size version when a wind gust must have dashed them into a pee puddle in the corner. Having them ruined for sure gave me the courage to try a painting technique I'd been curious about, since I would be trashing them anyway, why not try? 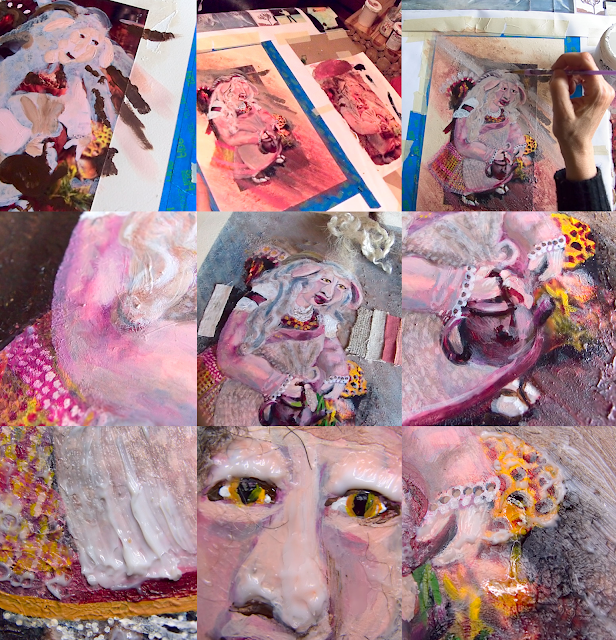 I glued the trimmed print onto watercolor sheet and blue taped a border on the paper. I taped that to a lap-sized desk of gypsum board that had been wrapped in brown paper with the second print next to it to refer to as I went. I was obsessed as soon as I began.

I've never painted before and considered adding the layers of color on separate leaves of acetate, in paint-by-number style before just trying it out to see how it was. I LOVED it! I wouldn't stop working on it for 3 days, stealing moments right from waking up to right to going to bed.

I was hoping to have it be very rustic and folk, to fit with the film's visual style. Very rough with high impasto texture, almost as an impression of the character rather than a portrait. I used a new medium from Nova Color that is nearly as matte as my trusty matte medium but a much thicker, #208 Matte Gel (satin finish thick paste; dries clear), to build up the areas I wanted to be most dimensional.

Even though she's positioned in her cottage, I only detailed the fire-lit hearth behind her shoulder and the dripping honeycomb near her hand to indicate her setting.

I used acrylics with unrefined (cheap) brushes in what I now believe is called dry brush technique, lots of blending colors and off-loading paint on a cloth until it could do what I wanted.

I made up a purpose for doing it (Needing a reason for doing something besides it being illegal amounts of fun.) and now consider it to be a "Swatch Character Painting", with all the little squares of Rana's costume added on as well as a bit of the hair and moss on the kettle lid (above, right) her spider web lace skirt peering out.

I hope to make one for each character eventually and have them bound into a book for viewing at the Halfland exhibition, should things go that way.