Catching Up: Getting Sorted Out 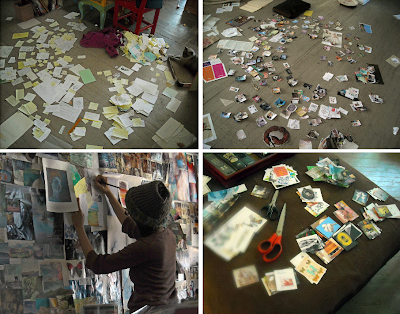 Things have been really rolling here in Halflandville over the last month. These next posts will be my attempt to catch you all up with all the headway.
Everytime I think of some concept or practical method of doing, having, saying, or making something for the film I jot the idea down and stick it in a box. This had lead to an avalanche of notes unread for years, and some very good ideas possibly being missed out on, connections in the story I'd made being buried, etc. Well, I sorted it all, all of it, every scrap, again. I even sorted and pasted up hundreds of image grabs from the web or print material onto more reference boards. It was madness.
I kept thinking I had "issues" but dear Paul, after having to step over them for weeks, laughed and decided the outcroppings of several sorting circles I was making all over the house were my art installations, bless him. I have given this a great deal of thought lately and come to the conclusion that I indeed do have issues but that I have found a way to direct them in a way that I feel good about. I seriously wonder what difference there ever is between an artist and a crazy person except the application. Word.
I was surprised by a few things during the organizing process. One was how many notes I had about the meanings and allegorical aspects of the project, soundscape ideas, etc. The other was how small character details connected in ways I'd forgotten.
I just remembered that one of the notes suggested "Lightning in a Bottle" (see previous post) So, that's how I got onto the idea! The fact that I had co-incidentally found the roots and put them in a bottle only made the dots easier to connect.
The other big innovation that came out of this exercise was that I finally got the idea to write the ideas directly onto the reference images! I can't begin to describe how completely cool this is. I grab a handful of scrap notes and go to the reference images on the wall the relate to that idea in each note and then write it down on the image collage wall. Doing this puts all the concepts for each aspect of the production in one place. When I build each puppet, set area, or prop, and refer to that area of the giant collage, I have all the ideas for that item right there to incorporate into it. Solid gold money idea, folks. 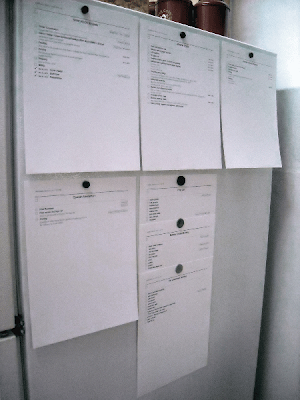 Animator Jessica Koppe and her code-friend and I are developing a project productivity site (maybe that's what got me going on getting the piles and stacks cleared out and in shape). I was testing an online tool for that and got all my current paid graphic jobs organized and scheduled, including all the remaining items needed for the project listed and on the fridge.
Rock, roll, and go go go>>>>
Posted by Shelley Noble at 1:35 AM