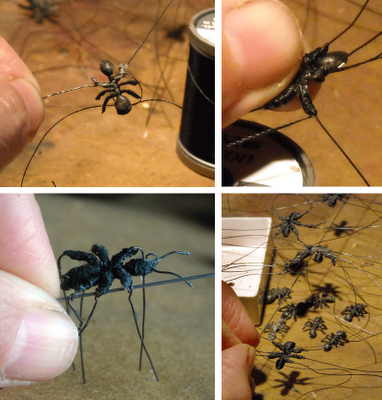 The main character Rana will be the largest puppet in Halfland I think. She's about 13 inches (33.02 cm) tall. The Writing Mouse puppet is super tiny for a mouse at only an inch long in the body. But The Marching Ants will have to be regarded officially as the smallest ones built.

I started with tiny 1/2 inch HA! (1.27 cm) black plastic toy ants, normally used for funny picnic table decoration (seen center bottom of the Raschs visit). Using them as a base allows me to keep the entire row of them pretty uniform in size. I tried several ideas, but what is working for me now is to attach 3 pieces of 34 gauge fine black wire to each pair of insect legs, one wire running across the body at each pair of legs. A little, and I mean little, drop of glue to start, and then securing the wire to the toys by tightly winding with black sewing thread until the entire bug is covered well.

These bases will likely be finished with black iron paint and a touch of rust solution, kept fully flexible by mixing with heavy gloss medium, to reinforce their industrious industrial natures.

I plan on having about 10 of them made for a row. In order to animate all of their 60 tiny legs--in unison!--I devised a technique of attaching the long ends of the wires through balsa floorboards to be installed in the cottage. Each Ant will be firmly secured (tied down, attached) at intervals across three separate slats, all right front and right rear legs on one plank, center legs on the second, left set on a third. By alternating each plank forward a bit in turn the ants should hopefully appear (enough anyway) to "march" forward together.

Here's a little preliminary test video to check whether the feet sort of march as I push the floorboards in sequence. A row of finished ant puppets, attached to the slats in the same way can be animated all at once at floor level this way, hopefully, as I get more adept at it. I'll be sliding the slats through a guide to keep them flush to the surface later.

*Extra points to anyone who gets the joke in their being called that!
Email Post
Labels: marching ants puppet building puppet rigging