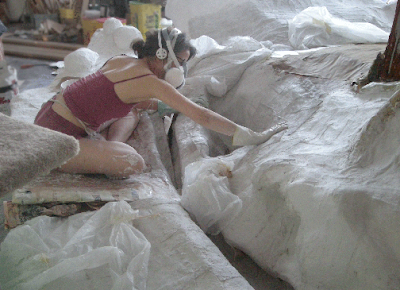 I spent the last week plastering up the entire main set landscape. There were a couple of "What the #@!#$ am I doing?!" that were quickly blotted out with a lot of "Mashed Potato Mountain, Baby, Mama gotta do this." And so I trudged doggedly onward.

Once Nick H mentioned using burlap, the greatest boon to mankind and my new favorite textile, things started to work. At first I used cut up bed sheets to reinforce the layer of plaster, but the course open weave of burlap supplied the necessary support that made the large set pieces rock hard when dry.

The straight away areas went quickly, it was the small curves of the seams where the pieces fit together and strengthening all the edges that took the most time and effort. For some VooDoo reason, about 30% of the strips remained flexible, even with the same amount of mix, temp, material, time, etc. I was able to correct all of it with a second layer, except inexplicably for one small piece opposite the Frog pond. Maybe I smashed it out of shape while sitting on it.

I cut out the bottom of the pond to gain access to more of the set and to give myself an easier time of dressing it and perhaps shooting up from the bottom if I'd like to later. The pond seems even smaller now than it was before, too small for what I'd like. But it does have to be where it is and I don't see a way to enlarge it with the door support being right underneath where it should spread out. Moving on. 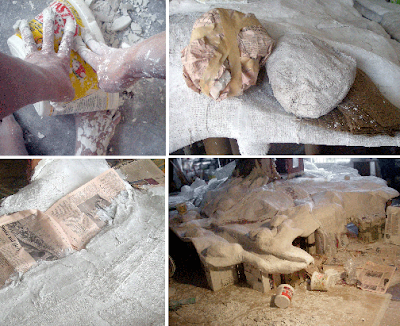 Clockwise a. Countless pails of plaster were mixed. Bonus: I could mix perfect plaster in my sleep now. b. I made extree boulders and rocks with lightly crumpled newsprint covered in plastered burlap strips. A layer of papier maché on top when dry will make the surface ready to paint rock like*. c. camouflaging seams where set pieces meet was the hardest part. Making them operate as independent shapes that also work together was a challenge. Paint color and fabric "grass", foliage, etc. will assist the illusion later on as well. d. It took two hours climbing above and below the set to get all the rubble up. The whole house is relieved this mess is done. (people foot and cat paw prints in white are everywhere!)

*Matter of fact, an "Integrity Layer" of papier maché over the entire landscape when dry would offer the perfect shape-keeping, chip-eliminating, burlap weave-covering, paint-me pretty mama, finish to this stage. And would also assure myself that these soon to be lovingly crafted set pieces will survive a potential move and re-assembly without crumbling apart.

I had to dig down for a lot of tenacity and aggression to get this much plastering done by myself. It felt great today to use the industrial vacuum, clean everything up dust free for painting, shower off a layer of plaster and get ready for the next step.

I plan to make some test swatches tomorrow of various formulas of paint, sand, water, and Fix-All/plaster over a patch that's already been machéd to see which will serve as... dirt. 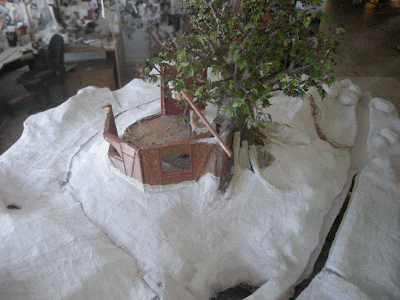