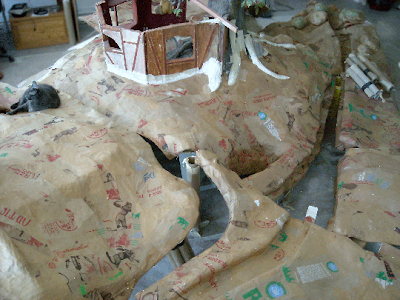 I tried to avoid having to do it, but now that it's done I'm so glad I did. The Integrity Layer. No longer delicate, these set pieces can now be man-handled and tossed around they are so stable. No chipping plaster, no paint flaking away later, yay.

It took another week but I finished covering the last pieces today with heavy brown bag paper and my new secret papier maché weapon: Elmer's Art Paste ( a brief moment of reverence for this product, please, thank you.) People, this stuff was a revelation. I only tried it at first because I had used every glue I had in the house without any luck. I need to adhere paper to the plaster and burlap layer around all the edges for a smooth finish but nothing I tried had enough GRAB to stick on that surface over all the weird angles. It was taking fore-evah.

To the rescue: I mixed a batch of the art paste at half the water directed to really make it a gooey clear gel (and lawd lawd it worked so well it practically snatched the paper strips out of my hands and fastened them permanently without me! Glorious stuff. So sculptural, so satisfying to work with. GRAB--BAM! 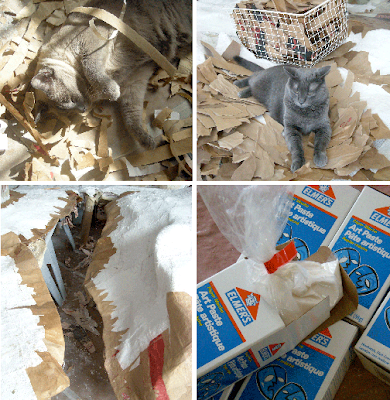 The cats were exhausted by helping me* tear baskets full of brown bags into organically torn shapes (no cut edges allowed as they would show as such under the paint layer). I first covered all the edges with strips and then filled in. These little bags of glue powder are as valuable as gold to me. Git yursef some!

In preparation for the color/paint layer, I am now refitting the pieces together. It's a lot more difficult than I imagined as the loose pieces are unwieldy and don't seem to return to how they were when they were still attached by screws. So far, it's a bit like trying to put the shells of an egg back the way it was before cracking open. All those angles and curves.

I've decided to take the large back-40-acres and position it further away from the main set, make them larger scale/more distant hills, freestanding in front of the sky backdrop. I'll know more when I illustrate the shot-by-shot but I don't believe I'll need contiguous land showing from the sides after all.