Catching Up: Growing a Backbone 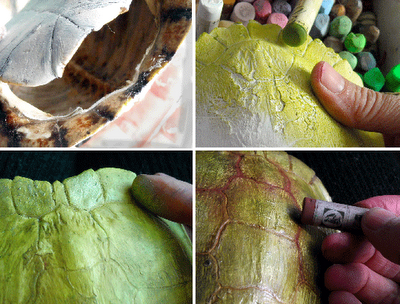 (SURPRISINGLY TO ME) Puppet Building has begun in earnest recently (more on that as the next few posts unroll). I bought this tortoise shell on my cross country drive in 1994 for the Torhare character which is a white rabbit with a tortoise's shell that Tarn uses like a horse. I bought it in New Mexico I think for $15. I always thought of using it to cast the character's shell, but it occurred to me to just use this real one and paint it with prettier colors.
I removed the grotty remains of the poor turtle ( you can see the way his spine is part of the shell itself (upper left) as I painted the shell opaque white. I then built up layers of color using finger rubbed chalks (upper right). A jewel-like iridescence was added to that with my special ceramic pearl waxes in lime green and emerald (lower left). The natural veins were made smudge brown via umber chalk after a tone-down with walnut ink solution. 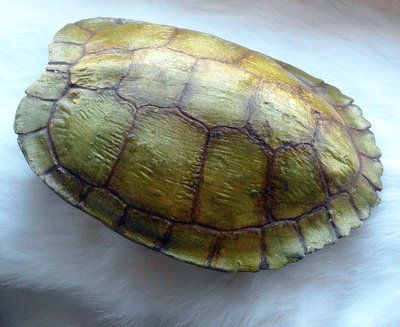