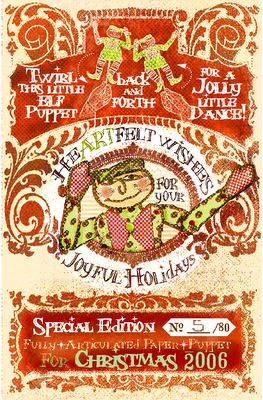 I took a day to design and illustrate an instructional tag to accompany our puppet card this year. I am really happy with the way it turned out. Taking the FREEDOM to simply play for that many hours, which I don't normally allow myself when working on a deadline project, allowed me to learn new exciting texturing techniques within Photoshop that I really dig! I will use what I learned doing this in other projects!

In a display of brinkmanship that made even me blush, I was frickin' STILL MAKING THESE ELVES AT A CHRISTMAS EVE EVENT LAST NIGHT. Can you believe it?! Himself had to go and find the people sitting in the audience listening to the music at the show as I would finish each one! It was a Hail-Mary-Last-Ditch-Effort to get these very time-sensitive fellows to their destinations before Arbor day! We did it though. With his help, I was able to complete the 80 I set out to make (plus 5 more for special blog/crafter friends I thought might enjoy it too). It was either the elves or me at one point. But I'm pleased to report to you that I was able to pull up enough grit and tenacity to get the job done. Which means that after this the Halfland cottage will be easy.

One of the best parts of making these was the absolute enchantment I experienced in watching a woman I didn't even know sitting next to me at the Christmas event. When I gave her the last elf, an extra I was saving for my craft scrap book, she was so delighted to have it, it was completely adorable to see. She giggled and played with it endlessly and was so captivated by its creativity and old-fashioned charms (a touch from another century as another good friend kindly put it). I was overjoyed to get to see the woman and her husband's reactions. I saw him walking around with it later, holding it carefully with the tag so it was unharmed, as if it were a treasure. Wow, what more could we want to have happened?!

In case you hadn't received your own Christmas card from us this year, I thought you might like to see what I've been working on (and on and on) for several weeks. Our first fully-articulated, paper-puppet elf to brighten your jolly holidays. 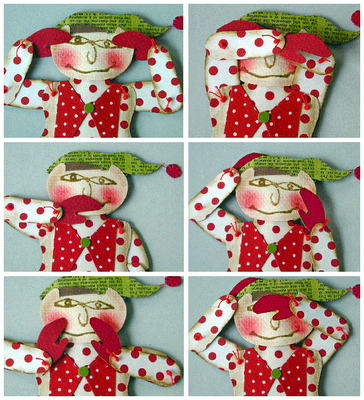 I laughed. I cried. I had real fun. I had my own personal elf hell. I loved making them quite a lot at times. And I was shocked at how loooooong it took. All these emotions swinging at 5-minute intervals. Here again, the link to the "Making of" slide show that tells the tale of this Christmas 2006 elfin friend of ours, Webster.
Posted by Shelley Noble at 5:48 PM