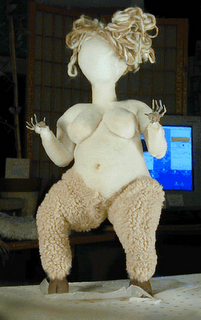 The Mach III armature becomes Rana's stand-in for a bit of brass tacks animation practice starting over the holiday weekend.

This dear little wire armature (as one of many armature 'speriments), fleshed out with foam, will happily be acting as an on camera stand-in for Halfland main character, Rana, the Goat Woman. After a while she'll be covered with clothes but I wanted to see how she moved without them first.

I did make a small clip with her tonight, with Framethief and the DSUWPoJ (Unibrain) and a simucaptured with a Nikon CoolPIx 950. But before I post a decent clip I'll need to figure out 1.) How to keep the Nikon monitor on during shooting. (It kept shutting off as I ran laps around the set like a hampster.) and 2.) How to import the resulting single images as a sequence that can be placed into an iMovie pane. (They seem to pile in at random.) 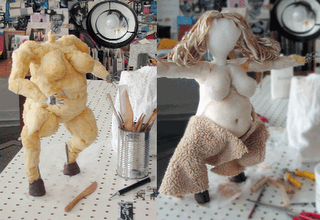 Starting at 4 this afternoon. I borrowed carriage bolts from "Down-Stairs Clares" that fit the peg board he gave me to practice on. Rushing against the clock, the sun, the moon, and now the sun again, I slapped some clay over the hoofel area (Don't worry, none of this is how I would do anything for the shoot if I weren't rushing and using what I had on hand for rehearsal.), covered the upholstery foam with 1/8th inch sheet foam, added woolly fleece and yarn hair.