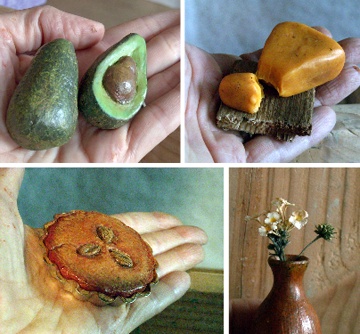 I feel gratified to announce that I believe and declare all food for the film is now made. Today I finished the last few morsels.

I wouldn't have felt complete without an avocado for some reason, so, done. tremendous fun to make, I used 3 shades of green rubberized oven-fire clay with a seed sculpted over the right scale bead. The skin was textured with a piece of dried avocado skin before baking which looks utterly convincing in person. I love it when the props fool my own eye for a second. I'll pick one of them up and think it real--only 2/3 too small to be real.

The chunk of cheddar cheese, another blend of baked rubber clay, walnut ink, and clay crumbs added as patina after baking, looks for all the world like what it's supposed to. I took a bite of it upside down so my bottom teeth would scale for Rana's top teeth.

I hadn't planned on making a pumpkin almond pie but now that I wrangled fluffy air dry clay into the right scale mini tart tin I found this summer, on top of a painted air-dry earthen clay crust, and topped with little sculpted almonds, I'm glad I did it. It'll rest on the kitchen window sill to cool, of course.

Bottom right is the first of dessicated real flowers that will fill Rana's vases. I pick them on walks and park them in silica powder for a few days to dehydrate. Works well. 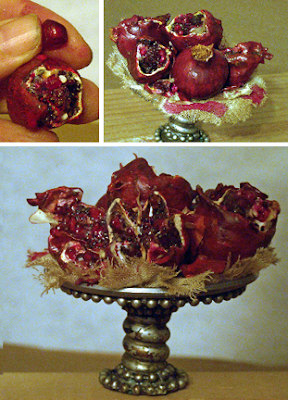 I improved the pomegranates. They had become too dark on their interiors to where the individual seeds weren't reading on camera. Being as it's now pomegranate season, Paul and I have been feasting on them. Looking more closely at a real seed (upper left) I thought it could be better replicated by using a white seed bead coated in a diamond clear gel that was tinted. I used an intensely rich fuschia silk dye to make a transparent coloring for a select number of accent seeds intended to break up the flatness of the darker beads. The result, finally arranged on a stained muslin tea bag lining my cake pedestal creation, made from metal odds and ends found at Canal Surplus in NYC, looks drastically more natural. yay.

It feels wonderful to have truly completed a big category of tasks for the project, especially since much of the food had begun 15 years ago (Paul did the math).

*There were a few fails today as well such as; an attempt to make the pink snail puppet ended up a sticky mess. I blended a lot of pink out of bake and bend clay (flexible oven-fired clay) pressed it over the ceramic snail sculpt that I'd made back in Ojai and baked it. It came off the sculpt nearly in one piece but the rubber clay wasn't flexible enough to animate as I'd hoped. I'll have to forget about the sculpt I'd made and try instead to make it as a build up puppet out of foam. I could always make a proper mold of the sculpt and cast the snail in latex, etc. but because it really is such a background character it doesn't seem that time would be well spent. Unless creating a build up puppet would take up the same amount of time. I'll find out.