I was on the couch this week but managed to complete a few more of the food props for Rana's kitchen.

A yellow platter holds a sculpture of green peas that were built up from layers of porcelain and paint on real flower seed pods that grew here at some point.

I spent a lot of time finally finished the ravaged ripe pomegranates, my favorite food. Each little seed bead encased in a drop of clear glaze. The hardest part was adding layers of porcelain coating to create the white rind over the round seed pod bases.

The red leaf lettuces were made by gluing embossed fabric leaves around a styrofoam ball, making them rigid with porcelain liquid and finishing with paint.

Lastly, I took apart a red silk dahlia, cut down the rings of petals, painted them with many layers of porcelain and white paint, sculpted lotus centers and sewed and glued them into two little lotus blossoms ready to be added to the Time Frog's pond near their floating pads and roots.

Still wobbly, but staying in again tomorrow with high hopes for planting some growing things on the Halfland set.

A Political Note, at this historic moment for my nation: 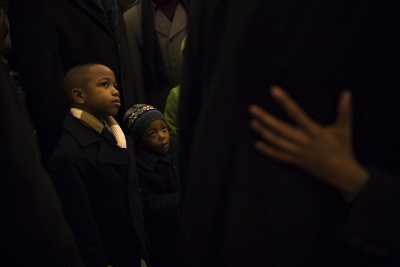 Of all the very moving sweeping grand and beautiful images of Barack Obama in the news this week, this one, by campaign photographer, Callie Shell, taken late during during the 2008 US presidential campaign reaches in for the gripping essence on my emotions. It captures the faces of two small African-American boys at the end of their many hours long wait to see this candidate, their eyes drinking in, memorizing, watching every movement Barack made as he passes near them. Their expressions tired, scrutinizing, yet also having a quality of dignity with them. The power of a man to inspire and influence the young as never before. In that, this has become, to my mind, a whole new day.
Email Post
Labels: foliage food props politics