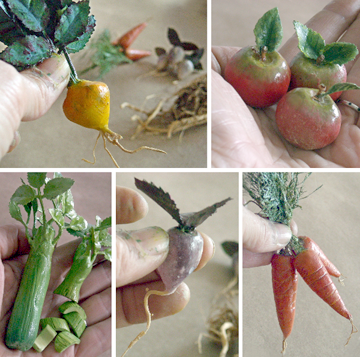 Had a blast over the weekend and finished off several more vegetables, many of them root veggies, for Rana's abundant kitchen! Really pleased with how they turned out.

I had sculpted the yellow squash, turnips, carrots, and apples way back in New York circa 1993 but only completed them, and made others from scratch, just now. It was a lot of fun to sculpt in the leaves and greenery onto the vegetable bodies inspired by nature. In the upper left background above you can make out the blurry root bundle I added to the vegetables as tails. You see, I had grown a plant cutting a couple years ago in water that grew a nice root system but then I kilted it by mistake. Never to be one to throw possible Halflandian gear away, I saved it. So this weekend I spent snipping off little curly bits and gluing them into poked holes in edibles. yay.

I'd like to tell you what I learned from this Halfland episode, it's something that I've been coming aware of about the project, something probably everyone's project does for them. Profounditty alert: I've noticed that as I begin to craft the various elements for the project I become more aware of the object(s) in question. I don't mean that I simply see them as I'm out and about, like a reticular activation phenomenon. I mean that I slowly begin to see and understand their creation in an expanded way.

Example: I've been sub-consciously thinking of crafting say the flowering vines on the cottage, well, I'll not only see flowering vines in neighborhoods while I'm outside but I'll begin to notice the ratio of blooms to greenery on certain varieties. Or I'll suddenly understand the structure of the flowers and their relationship to the birds and their seeds, etc. It's like an awareness moves in my head and I enjoy a greater understanding about creation.

How this surprisingly showed up as I was painting and making the vegetables, was that silly little things, that probably most people already know but that I had no idea about before come more clear. Like how the roots are not to be colored because they wouldn't get light underground. Or that often the coloring in the greens of an edible plant will telegraph the nutrients in the growing thing, if one could decipher its "label". Point is, everything we eat has it's own method of perpetuating itself and insects and animals adapt to utilize those systems and vice versa the plant adjusts itself over time to be better used. It's all so utterly gorgeously integrated.

It isn't that I attempt to precisely reproduce anything for the project, it's ultimately going to be whatever pleases me to do rather than accuracy. In fact, the visual style in Halfland is extremely rustic and primitive and above all textural. It's my visual expression of nurturing and contentment. But the added benefit of gaining a little more understanding about this world is a definite unforeseen bonus of making it all. [end of insight] 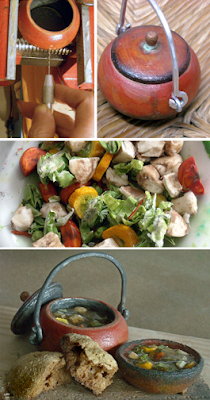 The vegetable soup was very successful! I had the little round wooden box painted along with all the other kitchen ware for Rana from the early days but it wasn't yet a kettle until now. First I had to route out the interior with a nasty drill bit that looked like a miniature mace, chomp, in order to push out the vertical sides like a kettle's would be. then I used (a very handy tool) the hand drill to pilot holes for the handle rings on each side. To make them I cut an "s" hook in half (HA!), glued them well in. The handle ended up being strong pounded wire, formed the ends with my jewelry making tools to have opposing hooks (how I knew to make the hooks go into the loops in opposite directions I'll not know). These were both finished with coats of steel paint, saw dust, and black acrylic wash to imitate sooty iron.

The soup's chopped vegetables were made of things like chucks of white airdry clay sprayed with walnut ink and then cut to make convincing mushroom pieces or painted yellow neoprene foam squash with their mangled centers and painted green and white seeds, and green crinkled wax paper cabbage shreds. The whole lot got sprayed with a clear spray sealant [The first tox thing under protest but it was essential as tests proved the soup would return the naked chopped props back into blobs; respirator; on back staircase.] then mixed into a batch of strong hold hair gel tinted with sheer walnut ink to make it a rich soup stock color.

Serve on a plank with whole wheat bread, baked back in New York, animate a few times this afternoon and you've got some steamy good eatin'! 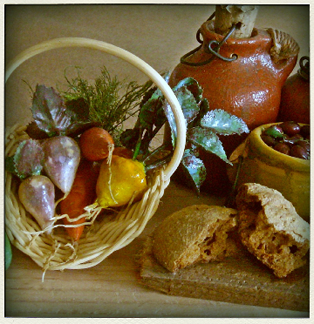 My roots are showing in a basket on left, one of Rana's water jugs in back of her clay jar of cured and herb olives, mini loaf of wheat bread up front. (image processed with fabulous free French Polaroid image maker, PolaDROID)
Posted by Shelley Noble at 10:25 PM