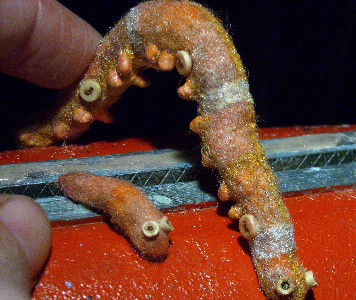 Herman has a new plaid sweater that buttons up nice and cozy.

The idea to add little twig buttons (like the ones I made last summer for a rustic jacket with matching woodland bracelet, shown below) to the rubbery caterpillar puppet, named by Stephanie as, Herman! (Rich added the !) came over me as great fun. But when I went to find him to do that he had disappeared. In one of those obsessive moments I kept looking for Herman! where could he go? Paul thought the cats ate him.

When I found him, I felt so glad that I spent some time sprucing him up. To get wooden buttons small enough, I tried slicing tiny dried twigs and toothpicks as dowel, but they each and all split, no matter what tool I used to cut them. I tried using punch tools on thin wood veneer to get little round wooden cookies but they wouldn't stand up to drilling micro button holes with a needle. I tried cutting reed beads in half but while they were a better scale, they didn't read as being buttons. It wouldn't have been clear what was going on. I finally overcame my aversion to plastic and used store bought mini buttons in bone color that I aged with, what else, walnut ink. Works every time.

I also improved the uneven texture transition from Herman!'s woolly felt coat and his shiny latex belly by using colored flocking fibers. He was looking a little rough there so the flocking allowed me to paint a line of glue just where I wanted to neaten up, at his hairline(s), on his back, and dust it with flocking sifted through an old tea strainer. I got into the technique and now his sweater has a plaid pattern. I like to think he's wearing a little cardigan for winter.

I used four of the sliced reed buttons that I had cut as eyes for the two fellas. They really have a comic personality now that I like. Paul named the little one, Catalina, after his pet cat that passed away a while back. He said he missed her, I didn't know. I may add whiskers on that one.

Great linen jacket came with ugly (plastic) buttons. I went to the massive Halfland tree branch supply, where there are branches, well dried out, ready to use, in any size imaginable. I chose the porch support branch diameter and sliced off a bunch of twig buttons, drilled holes. Replaced the jacket buttons and went crazy crafting a matching bracelet accessory with a small hand carved wooden bird bead and antler beads on a base of soft dried vines.
Posted by Shelley Noble at 12:54 AM