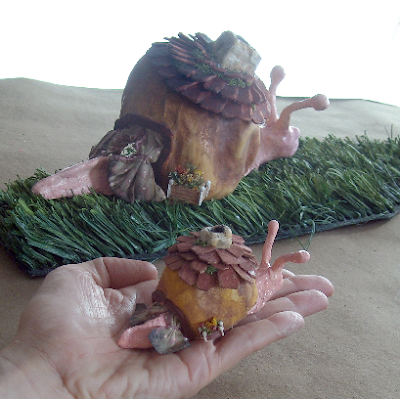 Halfland's Pink Snail, a semi-sensuous, fleshy, undulating garden background character with an elaborately self-sufficient home on its back. The larger, fully furnished shell house, complete with aged wallpaper and portrait of mom, was completed back in New York. But the snail sculpt is still just a fired ceramic that needs casting into a suitably flexible material. The little snail was made all day yesterday.

Trying to sort out the best way to make the puppet, I made a mini test snail out of fluffy air-dry foam clay that stays flexible and lined its underside with black metal foil that is used to direct gobo spotlights (Shel kindly threw me a swatch of it). All I wanted was to get the ruffled edges of the snail puppet to ripple. It works perfectly well. Then, in a reckless move I decided to go ahead and make a full replica of the Pink Snail's shell, you know, since I had the small one and all. You ever notice how such simple innocent (foolish) ideas just crunch about 10 fold the amount of time the idea could possibly take? Yeah, so it was 10 hours on the mini snail. Doh.

I was determined to finish it in one go, especially since there wasn't any reason for making it and I had wanted to do something on the set that made a larger impact of progress. Now that the .25land scale snail is done I'm kind of glad because I can throw it on the actual set, and animate it in the background, in the distance. Then I can use the larger one for cut away close up garden trail-making action on larger scale greenery. Shrug. 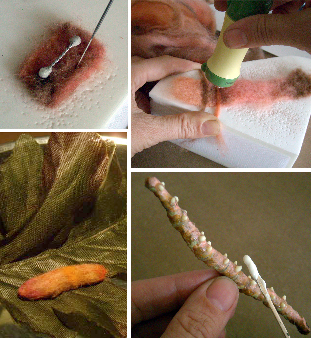 I got the idea yesterday too of needle felting the mighty magnets and wire armature into fuzzy woolly little flexible caterpillars. I made one (the left 2 photos above) just an inch long. His gallop across a silk leaf as a test last night below (Please click play twice to see it once it's cached as it's so brief.)


gallopinginchworm from herself on Vimeo.

I also built up the worm puppet from the other day and gave it additional flexi-layers of latex. But I wasn't satisfied with the texture, shiny layer and then a woolly fuzzy layer, kept going back and forth. Finally I needle felted him a striped woolly coat for his back and built up tiny leg nubbins on his underside. (clip below shot late last night shows the result which I like, please click twice to see it as it's very brief.) Again, there was no call on Halfland's character production list for a caterpillar puppet but now there's one done. I guess it was just one of those days.


Caterpillar, now with legs. from herself on Vimeo. 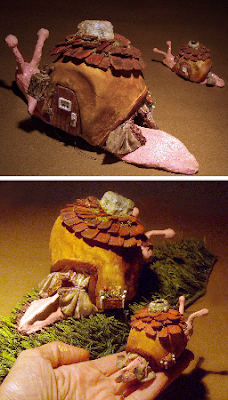 Bye, from Halfland, hoping your projects are fruitful.

It looks like I'll have another chance at the set tomorrow and I bought the materials today to build the important water barrel prop for Rana's porch. The project lust I feel is intoxicating on a daily basis.
Email Post
Labels: caterpillar Pink Snail puppet building puppets worm