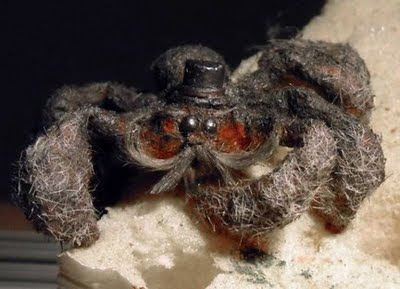 The Halfland version of the spider Rose Red found. 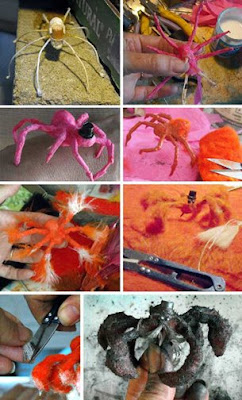 It's such a minor puppet, he won't be featured at all, just weaving his lace webs on the front porch in the background, he wasn't even on the official to-do list, so I tried to make him as quickly as possible.

I grabbed a wire and clay armature I had made in 1993 from the discarded ideas bag (upper left) and built him a dowel slice/wired disk top hat.; Papier machéd over tooth pick "bones" glued to the wire legs; it made a surprising;y life-like puppet in motion.

I started a lengthy process of adding fuzzy texture to the dry puppet. I sheared off fibers from bright orange faux fur and glued the fluff on everywhere. I tried multiple methods of getting white bristle hairs on his legs, including downy feather boa fluff cut from white turkey feathers (3rd row, left). I finally developed a good technique for it of using sharp trimmings from a lock of sheep skin fur, dropped into glue just on the forearms.

I gave him a big mustash and goatee from the same sheep hair and added eyes taken off of an unused store-bought bird. I obsessed for several coats of hair trying to get the orange to work for me, but it just wasn't happening. Finally, in a Hail Mary, I dusted the whole beast in pure graphite powder which gave iit all a great monochromatic nearly-black sheen.

One more white bristle layer and I called him done. I also call him Clare because he reminds me a little of dear Downstairs Clare somehow.
Posted by Shelley Noble at 12:19 PM