I knew I could never tame the feathers to get them to look less shaggy, it was beyond me. I had tried using thick hair styling gel and even glue. No, it was time to say "flock it." I painted on a coating of matte medium, then used a tea strainer to sift on cut polyester fibers called Fun Flock. (I wear a dual cartridge air mask as even though the material is technically non-toxic, I didn't want to have to process a lot of it through my lungs.)

It took several dustings and shake offs to get the flocking into all the crannies in all positions. I made the feet on both birds larger too. The eyes were made by sticking Vaseline coated dummy beads into blobs of hot glue to make the raised rims before dusting with flocking. Final eyes get permanently glued in with quick blinks to be added in post. The beaks were made with carved wood pieces, secured with wire to a strip of copper, embedded well inside the hollow head, which acts like a hinge. These puppets only have limited simple movements overall but they only have to suggest the furtive behavior of charming little birds. In hats.

On the left is the bird that was my best effort at the time when I urgently wrote to Mike in a panic. On the right,. is the currently improved puppet after reworking. His wings had to be removed and re-positioned higher on the body so that he could fold the wings into a relaxed position as well as outstretched. 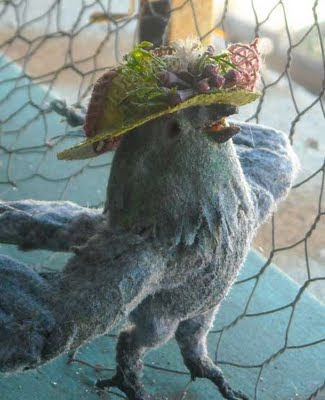 It's getting there. I believe they will be as cute as I had hoped for the film. 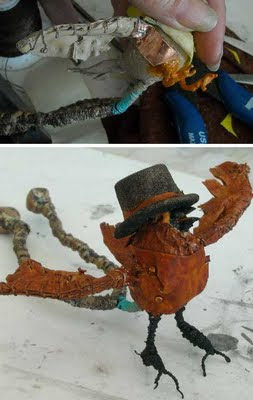 I start feathering the second warm browns bird next. She/he will have the advantages of the many things I learned making this one. So far, I call her Frankenbirdie.
Posted by Shelley Noble at 1:10 AM