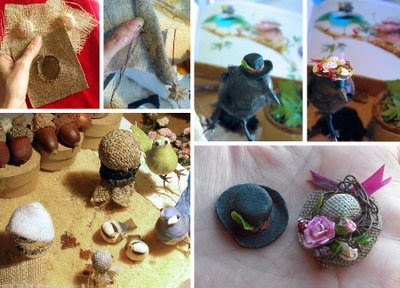 I saw a hat shoved into the crook of a tree branch as I was walking Friday. It triggered a cascade of Halfland connections. Suddenly, the acorns on the Answer Tree would not only have woven fabric caps that look like natural acorns' but actual knit caps and hats as well as a pun on the term "Acorn Caps".

This would tie into the selection of fancy hats hanging on the branch at the cottage entrance where the Birds in Hats fight over the mirror causing a hat to fall off its hook and land on the head of the sleeping cat below.

Inspired, I spent an entire 24 hour indulgence yesterday making miniature hats for the props & bird costumes. I covered anything I could find to use as tiny hat blocks in foil so the matte medium used to fix them wouldn't stick. I used millinery buckram for the unfinished straw hats (top left), felted wool sweaters for the comical Peruvian cap with long tasseled flaps (seen in top photo below). I cut finger tips from knit gloves for tiny knitted caps for the nuts. These will be embroidered with colorful thread designs.

I tried so hard to make an elegant silk top hat for the gentleman bird but kept getting the brim, made from a silk covered grommet (in black above) too broad. I'll need to try again in stretch satin, slightly crisper and taller.

The size of the finished hats in my palm? So small, they'd fit as a hat on the tips your little fingers. Halfland hats have little leaves stuck in the brim instead of feathers, for obvious reasons! (These leaves were made from real leaves the way I made the waxy ones seen here.)

Making these hats helped me determine the size of the Bird character puppets will be. Their heads will be about the size of the stand-in crow's above, on a slightly smaller fluffy more colorful sparrow body overall. I've got everything ready to make the Bird puppets now. Thinking of wire armatures with pin and wire tie-downs to pierce and wrap around branches. Or I might hot glue them down. Got the gorgeous patterned feathers, in warm tones for her, cool for him. I'll construct them so that their heads swivel, beaks open, plug-in wings, in just two modes, open and closed, and eyelids that quickly flash blink. 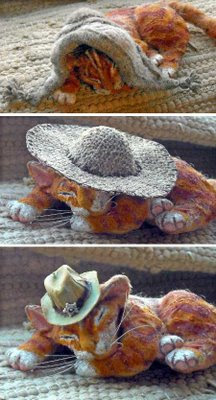 As a running gag, I think it'll be be really funny for a different hat to fall on Bosq the Sleeping Cat's head from a Birds in Hats fight at some point in every Halfland film! Hilarious!

The sombrero in the middle isn't finished yet, needs embroidered pattern. The sheriff's hat (on bottom) was trying to be a silk top hat, and then a fedora as it was being made. But when I flocked it with yellow fibers and then chalked over them with olive green it just looked too much like worn leather. The star is from my jewelry findings box.

The knit cap on top is foiled and wired inside to animate while falling/landing. I want to change it's color and maybe add some sewn pattern as well to make it seem to fit the cat better. This will be the first hat to fall as the sight makes me laugh the most.

The straw hat in the middle might be a sombrero or it might get frou frou'd up with flowers and ribbons. All the straw hats are very durable with liquid porcelain coats inside after initial shapes were formed.

Made from silk, stiffened with liquid porcelain, the dry hat on the bottom feels as durable as plastic. Style-wise, I didn't really want anything so distinctively cultural or period specific in the film as a Fedora or Western hat, but what the hell, it looks skillfully made in person and besides, anything for a good joke.
Posted by Shelley Noble at 7:09 AM